What do you know about the climate crisis? What is it?

1. Are you worried about the climate crisis? (Check to see how students feel about the crisis, how they view the future)

2. What has to be done to help solve the crisis? (What solutions the students offer, do they feel like they have something to do about it)

3. How does the climate crisis affect the world? What do you know?

4. What are we doing to fight the crisis these days?

5. Why is it important to talk about the climate crisis?

The following list contains words related to the climate crisis. Practice the words with the flashcards and the quiz ⇒ 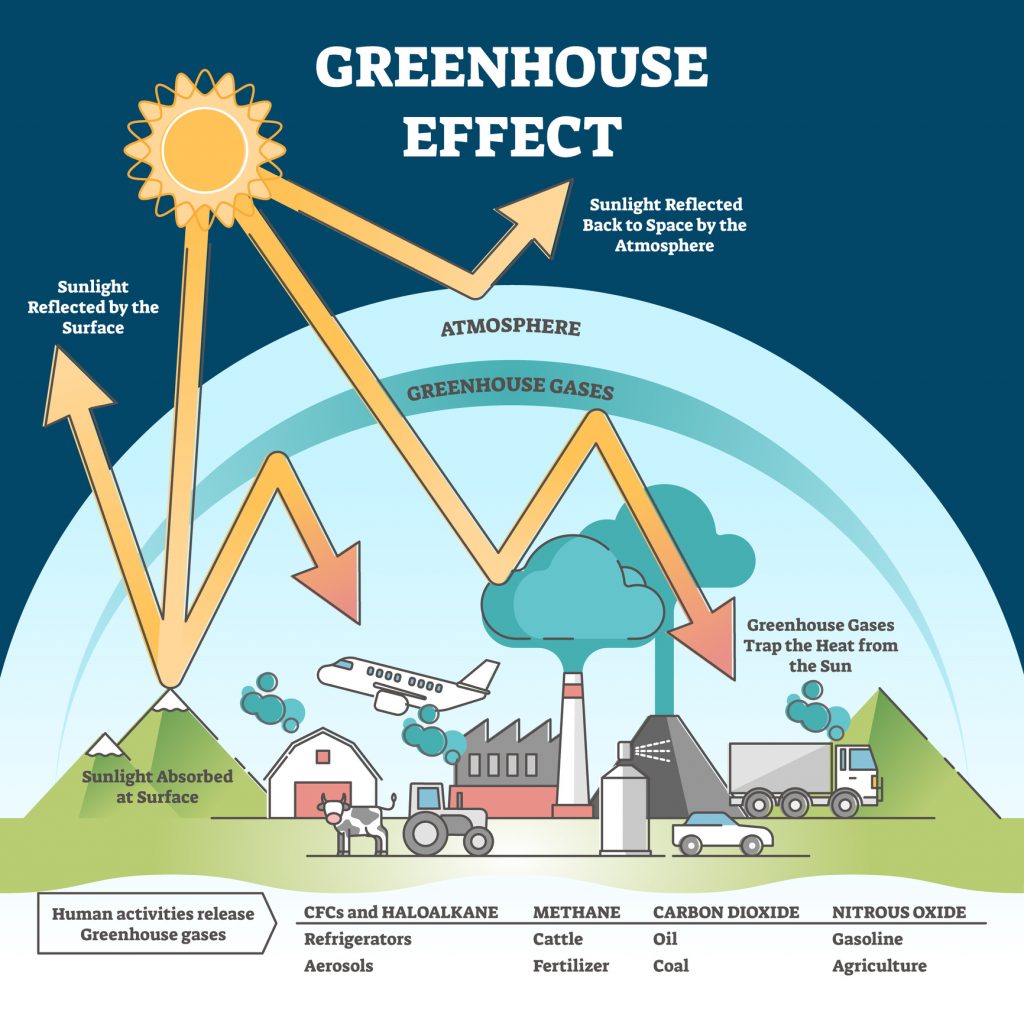 Global warming and the climate crisis are happening because the temperatures on Earth are slowly getting warmer. To understand global warming, it helps to understand the greenhouse effect. A greenhouse is a glass house where plants grow. Glass lets light in and keeps heat from leaving. This heat keeps the plants warm even when it is cold outside.

In the same way, Earth’s atmosphere traps heat from the Sun on Earth. Gases in the air like carbon dioxide and other gases that are called greenhouse gases, behave like glass in a greenhouse, keeping the Sun’s heat on Earth. Without these gases too much heat would go back into space, and living things could not survive. But, the more greenhouse gases get into the air, the more heat they trap. This leads to global warming.

For a long time in Earth’s history, greenhouse gases were not a problem. This changed when people started to use fossil fuels (oil, gas, and coal) more and more. People burn fossil fuels in factories, to run cars, to make electricity, and to heat houses. As fossil fuels burn, they release carbon dioxide into the atmosphere.

Also, people have cut down many forests. Trees use carbon dioxide when they make their own food. Fewer trees mean that less carbon dioxide is being taken out of the atmosphere.

Why We Should Worry

Scientists aren’t sure how warm Earth may get in the future. Some guess temperatures will rise between 1.8° C and 4° C by the year 2100. The hotter weather could hurt living things. It also could cause polar ice to melt. This would make the sea levels around the world rise. Plants, animals, and buildings next to the seas and the oceans would be in danger.

Global warming is a worldwide concern. Governments are trying to find ways to limit the amount of greenhouse gases put into the air. People can help by driving less. They also can save energy by turning off unneeded lights and other electrical devices.

4. What is NOT one of the effects of global warming?

a. Electricity will stop working.

b. All the polar ice will melt.

d. Animals will be in danger.

5. People can help tackle the crisis by…

b. Stop building any more greenhouses.

c. Not living next to seas and oceans.

1. Why is global warming happening?

a. Because people are drinking too much water.

b. Because of the greenhouse effect.

c. Because there are too many greenhouses.

d. Because plants grow too fast.

2. Carbon dioxide is a kind of…

3. Why did greenhouse gases start becoming a problem?

b. Because greenhouse gases aren’t a good fuel.

c. Because people started burning a lot of fossil fuels.

Take our Morfix quiz about global warming, made to raise awareness of this critical matter.