The following links contain two vocabulary lists: the first list is suitable for grades 5th-8th and the second has more advanced words for grades 9th-12th.

Review the lists using flashcards and ask the students to explain (in English) how each word is related to Passover. For example: for the word 'freedom' students should give an explanation similar to the following: "The Israelites were slaves in Egypt and yearned/wanted/wished for freedom

Fill in the correct verb from the word bank. Make any necessary changes to the verb to suit the sentence grammatically.

1. Pharaoh _____________ that the Israelites would be slaves of the Egyptians and that every newborn son would be thrown into the Nile.

9. The Israelites _____________ dough in order to bake bread for their journey, but they did not have enough time to let it rise, so the bread turned into Matzah. 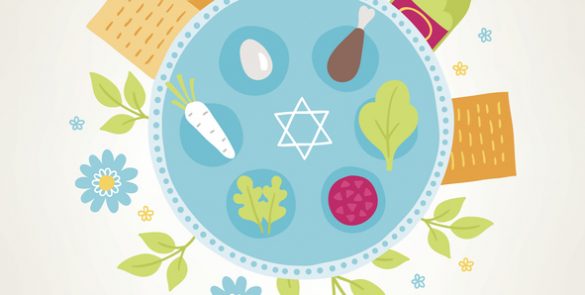 We had to hurry from the land we were slaves
So we're chametz-free, culinarily

We're eating the matzah!
And the seder plate
Helps us tell our story
At the seder
The seder tonight
Seder to
Seder tonight!

Now, Pharaoh, you're a mighty king
But I'm telling you, beware
You come into my palace
Making threats, Moses, you dare?
Your days of making Jews your slaves
Are done forevermore
And if you challenge God
Ten plagues will shake you to your core

I'm telling you, you'd best listen to me
Or God will bring your kingdom to its knees
It's time to let my people go, you see
'Cause we just can't wait
To be free

When the seder table is ready
And all the chametz has been found
Our family arrives, and the sun leaves the sky
At the table, we'll gather around

At the seder tonight
Passover retold