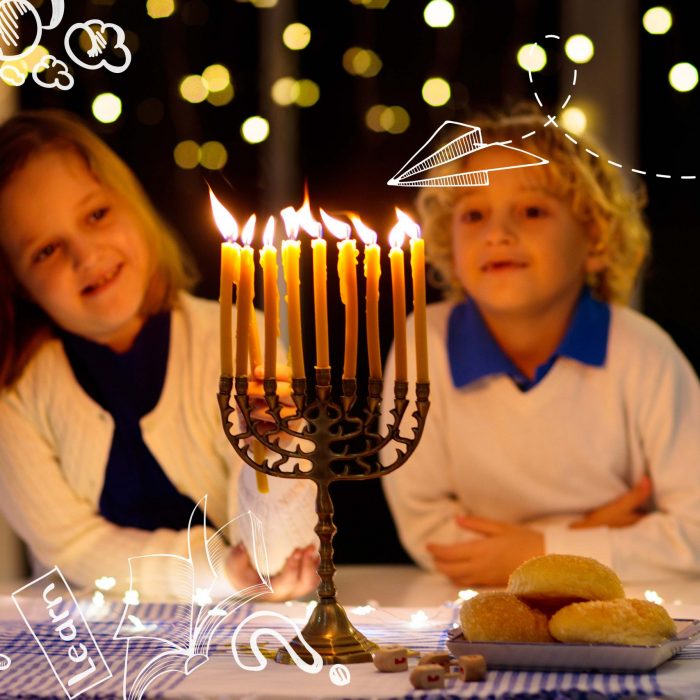 Pre-Listening Activity: What do you know about Hannuka?

1. What foods are traditionally linked to Hannuka?

2. For how many days do we celebrate Hannuka?

3. What’s the best type of oil to use for lighting the menorah?

4. The menorah in the temple had 7 branches. What does the word ‘branches’ mean?

5. How many branches does the menorah (hanukiya) that we light on Hannuka have?

Click the button below for the video of the story of Hannuka.

Below is the script for the video:

Long ago in the land of Israel, in the center of the walled city of Jerusalem, there stood a beautiful temple.

Outside of Israel, though, there lived a very wicked man name Antiochus, the king of Syria.

The king did not like people who had beliefs different than his own and so he went around the world forcing his religion on all the people he conquered.

When Antiochus and his army invaded Israel and took it over, he decreed that only his gods could be worshipped. He made the Jews swear to give up their religion and customs and follow his instead. He also commanded that all of the Jewish temples be converted or destroyed, including the beautiful one in Jerusalem.

Those who refused to follow Antiochus's commands were to be severely punished. Some Jews obeyed Antiochus out of fear, but others were brave enough to refuse. Judah Maccabee was one such man. Judah and his brothers were all strong fighters who formed an army of their own to fight King Antiochus and his men. Although they were greatly outnumbered, the Maccabees fought the Syrian army with all their might.

With the strength that only comes from fighting for something you truly believe in, Judah and the Maccabees defeated Antiochus and his army and triumphantly reclaimed the Temple in Jerusalem. However, when they entered the Temple for the first time, they were shocked to see it in shambles. The golden pitchers were all tarnished, the marble floors were cracked, and there was no oil to light the Menorah.

They began cleaning the temple, removing every sign and symbol of the religion that had been forced upon them by their invaders. As they worked, they found a small container of oil.

They all knew the little oil they had would only be enough for one night, but then a miracle took place: instead of going out, the lamps kept burning and burning. They burned for eight days and eight nights, and because of this, the Maccabees knew God was with them.

That is why we celebrate Hanukkah Every year, and why we light eight candles in our menorahs.

The following list contains words related to Hannuka. Practice the words with the flashcards and the quiz.

3. What is meaning of the idiom burn the candle at both ends?

1. What is the meaning of the idiom out like a light?

b. had to flee to another country

c. the electricity is out

2. What is the meaning of the idiom see the light of day?

Want to learn more idioms? Click the button below.

All About the Neis by the Maccabees

All About the Neis

We took the Temple back!
One day of oil burned much more than that
And now we celebrate by eating fat
But we're here to tell you that
Our holiday is so much more than spinning plastic tops

My bubbe she told me it's not bout the foods you fry
Faith, family, freedom we celebrate for eight nights
You know that latkes and dreidels and presents are all good fun
But if that's all you do then your holiday's just begun

The ancient magazines, they put the Greeks on top
Oppressed the Jewish state – they had to be stopped
But Maccabees had faith – they wouldn't give it up
Our holiday is so much more than spinning plastic tops

My mamma she told me it's not bout the foods you fry
Faith, family, freedom we celebrate for eight nights
You know that latkes and dreidels and presents are all good fun
But if that's all you do then your holiday's just begun